You're cordially intived to the exhibition opening on Tuesday 14th of September at 18:00 p.m. 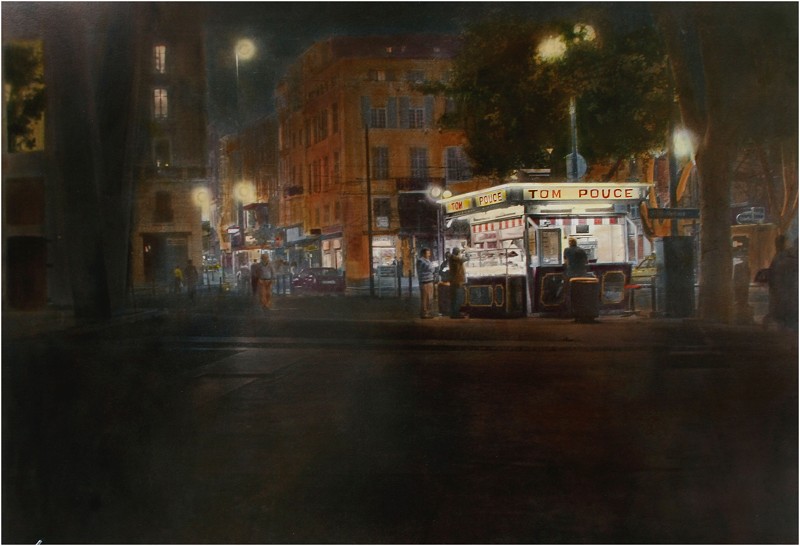 “Day-for-Night (“Day as Night”), often simply American Night, refers to a process of cinematography in which film scenes shot during the day or at dusk are used to give the viewer the impression of a night shot.” (from the Wikipedia article “Day for Night”).
“The American Night” (“La nuit américaine”), film by François Truffaut, France/Italy 1973.

Rambler in the dusk

The concept of Nachtstücke (nocturnes) has its culturo-historical counterpart in music, painting and literature. In literature, it tends to describe eerie and gloomy characters (as found in the works of E.T.A. Hoffmann and other representatives of “Black Romanticism”); in the domain of music, however, it primarily appears in the form of nocturnes (Nottornos) and, above all, in “melancholic piano pieces”, such as those of Frèderic Chopin and John Field.

In the domain of painting, the notion of Nachtstücke, which enjoyed immense popularity between the 15th and 17th centuries (Rembrandt and Bosch) in the epoch of the Romantics, experienced a renaissance that was associated with a new orientation and ideas charged with content. From this time on, the artists (one naturally thinks of Caspar David Friedrich and his school) now created nocturnal landscapes, which often involved mysterious illuminations that could be interpreted as existential “soul landscapes”.

In the early 20th century, Nachtstücke generally appeared in the form of postcards displaying motifs of the shining moon. At best, Magritte’s The Empire of Light might still come to mind here. And like so many other subjects in the field of painting (flowers, sea motifs, etc.), they became the victim of an obscure verdict imposed by modernity that was (and still is) considered to be explicitly romantic – a feature that frequently continues to be equated with kitsch.

If one examines Winkler’s all-embracing, polymorphic work, which now spans more than three decades, it is striking to see how he repeatedly and unconsciously takes up these “sujets non gratae” and is unafraid to make this or that “faux pas” in the process. For us, however, the truly interesting aspect seems to be the way he does so: He is evidently not in the least interested in provoking his audience or breaking taboos; and although humour has always remained a central feature in his works, he generally avoids all kinds of ironic ruptures aimed at protecting himself. He seems to take this very seriously. Indeed, he approaches his motifs with the curiosity and impartiality of a timeless wanderer “in passing”, as it were, and without prejudice – and entirely among us boarding-school pupils: Isn’t this a precious moment: the transcendence of time, as we stand before a painting dating from the 16th or 19th century and feel touched and moved by this – feeling as equally at ease as the contemporary observers of these distant epochs?

Incidentally, if Winkler is asked about this: i.e. that the photographic technique of colouring an object using albumen in egg yoke glazing medium in general and appying it arbitrarily in connection with kitschy-nostalgic postcards, in other words: if he merely shrugs his shoulders (as an un-artistic and un-contemporary technique), it is because he does not seem particularly interested in the latest contemporary connotations and conventions, nor in the related receptive patterns. At best, it is the unartistic aspect that is not so particularly convenient as far as he is concerned. All artists are vain, and in his case vanity certainly does appear to be based on a strange premise that allows him – in an age of seemingly unlimited hererogenic art (and photographic) production– to remain an outsider and a loner.

And as a consequence, one or the other of the discourses and contextaffine connoisseurs with a certain sense of perplexity will continue to stand before the artist’s paintings. As far as we can tell, however, his restlessness seems to share a remarkable reciprocal relationship with the auratic presence from which Winkler’s basic succinct lapidary photographs arise.
Text by Anne Sévigné

A comprehensive retrospective of Gerhard Winkler’s work can currently be seen at the SK Stiftung Kultur, Cologne / Die Photographische Sammlung. The exhibition entitled “Specimen – Photographs and Sculptures“ is on view until 16 January 2022. The exhibition shows around 100 analogue and hand-coloured photographs as well as seven sculptures, which the artist has arranged in a kind of installative network to form a challenging course in the exhibition rooms.